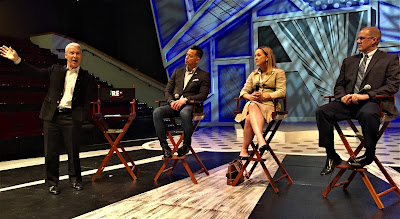 Last night I attended a Community Conversation meeting on the topic of human trafficking in Central Florida.

Dr. Joel Hunter, pastor emeritus of Northland Church and founder of The Community Resource Network, moderated the conversation. (Side note: As a former Northland member, I have known Joel since he and Becky came to Orlando 1985, but I hadn't seen him in several years. What a delight to chat with him after the meeting! I have always said he has a heart of gold, and now more than ever.) Northland is now a megachurch of 20,000 and Joel was a spiritual adviser to President Obama. He "retired" last year to devote his time to rallying the community around such issues as homelessness, addiction, and trafficking. That takes humility and courage! The Community Conversation meetings are a part of his initiatives. Please take the time to read this article in Christianity Today: Joel Hunter Is Done Pastoring His Orlando Megachurch. 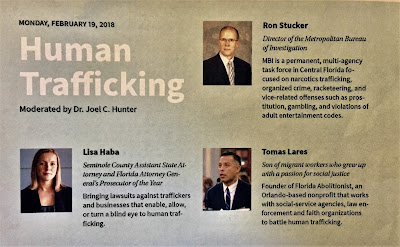 I took 8 pages of handwritten notes, scribbling as fast as I could to keep up with the torrent of information. Here is some of what I jotted down; I have attempted to synthesize and organize it, but it's a wild beast, so please forgive if it seems disjointed.

First, what is human trafficking? I looked up the definition this morning.


Trafficking means recruiting, abducting, facilitating, transferring, harboring, or transporting a person, by threat or use of force, coercion, fraud or deception or by the purchase, sale, trade, transfer or receipt of a person, for the purpose of subjecting that person to involuntary servitude, peonage, slavery, slave-like practices, sex trafficking, or forced or bonded labor services. (Source: www.gohttf.org)


Joel gave one real life example of human trafficking which hits way too close to home since I personally know the family. This past weekend, an 11 year old girl was lured online (via playing Minecraft) to leave her home in the middle of Saturday night to meet up with someone she thought was a female. Due to quick work by the FBI, she was located on Sunday in another state in a hotel room with a male perpetrator. We are so thankful for her safe return to her family but I am sure she is quite traumatized by the experience. She has a long road of recovery ahead of her.

What are some other examples of human trafficking victims?


Joel asked Tomas Lares, "Why don't more victims try to escape?" Tomas started with the word victimology. They don't feel like they deserve any better. They are psychologically powerless. They have been raped, battered, threatened, and otherwise intimidated by the perpetrators. They don't think they have a safe place to go. They may have no other means to support themselves or their children. Even if they do get away, they fear retribution against loved ones. Many have been sexually exploited hundreds or even thousands of times; they have been used and abused to the point that they perceive themselves as worthless and hopeless. Many have Stockholm Syndrome, which makes them sympathetic to those who are abusing them. Many have been numbed by (and become addicted to) drugs and alcohol.

What can we do? We can start by using our power wisely.

If you have power - and you DO have power - how will you choose to use it? Will you EXPLOIT others, AVOID getting involved, or ADVOCATE for the vulnerable? Lisa Haba noted that we tend to avoid vulnerable people because we are afraid or because it is inconvenient. This only enables perpetrators who keep committing their crimes, because they think no one will bother to prevent them. Instead, we need to be like the Good Samaritan, who stopped to help the wounded Jew on the road to Jericho. You can make a huge difference if you change your mindset!

Ending sex trafficking requires a multi-faceted approach. Many of these strategies also apply to other forms of trafficking.

What about other forms of trafficking?

I know this is a lot of information to process. Please take the time to think through this thoroughly, and decide how you will take action in the fight against human trafficking.

On a personal note: I have been seeking God's wisdom on my own future. As I write this, I am in the middle of applying to Asbury Theological Seminary (Orlando campus) for a masters degree, probably in chaplaincy or pastoral counseling. For a regular job, I plan to work with the elderly and hospice/hospital patients and their families. However, my hope is that I will be equipped to also extend basic frontline ministry (comfort, encouragement, referrals to more comprehensive care) to women in the community who are at risk from domestic violence, homelessness, sex trafficking, and faith crises related to spiritual abuse. Please pray for me as I take each step by faith.

I have other blog posts about human trafficking and related issues: