Though I haven't blogged at Watch the Shepherd in nearly three months, I have been keeping a pulse on one of my major themes here: abusive relationships in families and Christian movements.

The big one in the headlines is that Idaho pastor Saeed Abedini, who had been imprisoned and tortured in Iran for a few years because of his ministry there, was released last month in a prisoner swap. His wife Naghmeh worked tirelessly for his release, making countless media appearances and appeals to US government authorities, including President Obama, who intervened on their behalf.

The Christian world has gone crazy. Many point their fingers at Naghmeh: How dare she do this to Saeed after what he has been through? Aren't there two sides to every story? Maybe she's lying, or at least exaggerating? What about his feelings? Why won't she reconcile with Saeed? Why won't she agree to couples counseling? Why won't she play nice and be a good wife? Or is she hiding something? Maybe she's greedy and wants to keep all the money she raised while she was trying to get him released? Or maybe she is covering up an affair? The insinuations have gotten pretty vile. Personally, I am particularly irritated at Franklin Graham for his public statements which are making things even more difficult for her.

Others, like me, choose to stand with Naghmeh. We know too much for our own comfort about marital abuse and its aftermath. We will not stay silent.

Every time a new article about the Abedini family has popped up in my blog reader or on my Facebook feed, I have linked it on my Facebook wall. So I have quite a collection, most of which I will now share with you.

Saeed Abedini and Franklin Graham Promote “Couples Counseling” to Reconcile the Abedinis. Because of Saeed’s Abuse, is This Counterproductive? from Spiritual Sounding Board

For the Continuing Naghmeh Doubters: Yes, Saeed Really Did Plead Guilty and Saeed Abedini's Wife Files Legal Papers in the Wake of Her Husband's Release by Wartburg Watch


Welcome Home, Saeed Abedini. We're Sorry, But There Won't Be a Parade and Follow-Up from the Saeed Abedini Blog Post by Chad Estes


Pastor Saeed and the Double Standards of Abuse by Ashley Easter

That was quite an education, wasn't it?

What is my point in sharing all of this?

Naghmeh has found her voice, not only to advocate for her husband all these years, but now to advocate for herself and her two children. Is she selfish to do this? Not at all! Victims have every right to speak up and be heard. In doing so, Naghmeh also advocates for countless other women who find themselves in similar situations. They are everywhere. You may think you don't know any of them, but I'll bet you do. It's just that not all of them are in a position to say anything publicly. It's a matter of safety for themselves and their children, it's embarrassing, and their family finances may depend on the husband's reputation. Some of them do drop hints, intentionally or not. Some of them also ask for help privately. Tragically, many will be treated like Naghmeh by self-righteous or merely naive people who don't have much of a clue about the dynamics of abuse.

I have had so many domestic violence victims tell me that their pastors and Christian friends have shamed them for telling their stories. They are ordered to "Stop being so bitter. Just forgive and move on!" Sometimes, they seriously just need to disentangle from their abuser and move on. A wife is under absolutely no obligation to return to or submit to an abusive husband. Separation and even divorce are her right. So many just do not understand this.

This victim shaming has to stop. NOW! Maybe the media coverage and pushback from Naghmeh's will bring this to light even more.

As for me, I intend to stand with Naghmeh and with other victims of family and spiritual abuse wherever I find them.

And now I'd like to share links for articles I have written about domestic abuse and the church's response.


There is such a sadness that comes over me when I write about the topic of abuse. My heart cinches up inside. Yet I am glad this affects me. It should. It is a sad thing.

I am thankful for people like my own pastor, Mike Tilley, who has preached that wives are not to submit to abuse and that husbands must not be domineering. I am thankful for bloggers around the world who have spoken out. I am thankful for women and men who have quietly ministered to domestic violence victims with kind words, protection, shelter, financial support, child care, and other help. I am thankful for my women's Bible study group where I am reminded of God's love for all of us, even in the trials of life. I am thankful for Naghmeh for putting herself on the line for truth and justice and compassion.

To Naghmeh and other survivors: If you ever read this, my love and prayers and support are with you. I would love to hear from you.

Here is a song to bring you a little more courage than the astounding fortitude you already have.

"Tell Your Heart to Beat Again" by Danny Lokey

P.S. If this post has helped you, would you be so kind as to forward it along or link it in your blog post or Facebook wall? 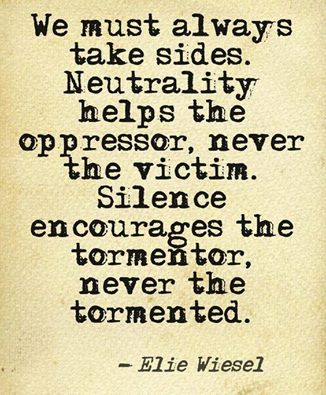 Posted by Virginia Knowles at 1:43 PM