International Women's Day 2017: What Do You Stand For? 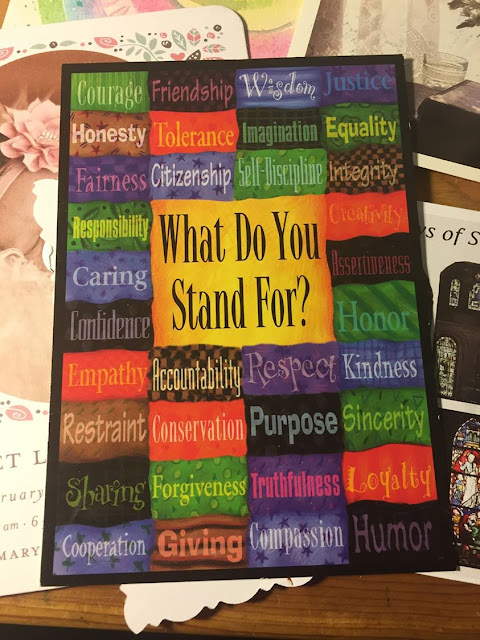 It is International Women's Day again!

What does that mean?

I am an evangelical Christian and a feminist, and no, those are not mutually exclusive. And yes, I am still very pro-life. (And not just until the baby is born!) I also have seven daughters, three sons, four grandsons, and two granddaughters. I've put my time in.

This morning, I started going through my "On This Day" memories feed on Facebook and re-sharing IWD posts from years past, like my own article here on Watch the Shepherd: Women's Voices Rising.

One of my Facebook posts read: "I am a woman. But this day, though for me, is not just for or about me. Think of women around the globe. Think of their challenges, their heartaches, their opportunities, their examples, their gifts for their families and communities. Let us sit with them in empathy, stand with them in solidarity, walk with them into a future of progress, dignity, and equality. We are women. Let's make this about each other, all of us, and about all of the girls in generations following us."

I added a fresh new picture for my quote. I had taken down my bulletin board recently and piled its contents on my desk: baby announcement, cards from friends, clipped quotes. The postcard above, purchased at the holocaust museum in Washington D.C., sums it up for me.

I stand for women on this day. One of my missions in life is to empower women around the globe. Courage. Strength. Respect. Purpose. Equality. Assertiveness. Confidence. Justice. Honor. These don't come easy in a world where many religious and social systems subjugate women. Think that's just far away in some Third World country? Nope. It's here in the USA, too. Been there, done that, walked away from it. It has hurt way too many people whom I know and love. These are just some of the articles I have written.

This past year, it's been difficult to watch the ascendancy of Donald Trump to the presidency. Even though he acknowledged International Women's Day on Twitter today (be sure to read comments), he does not, in my opinion, represent the interests of women very well. It's not just a lack of support, but his attacks on women, not the least of which would be the sexual assault of strangers.

By coincidence, I was in Washington D.C. the weekend of the huge women's march. I was en route to my aunt's funeral in Pennsylvania so I didn't go. I also have concerns about the march organizers not welcoming pro-life leaders. However, there is so much more that I do support about the aims of the march. On my flight back to Florida the next day, I sat next to a woman who was in D.C. for her grandmother's birthday and had walked along with part of the march while she was downtown. We shared so many common views about empowering women. I loved to hear her story, face to face, of succeeding as a woman of color despite many challenges.


When I was a small child, the only jobs commonly open to women were nurse, teacher, secretary, and maid. And I'm only 53! Things were much better by the time I reached high school and college, but there was (and still is) discrimination. This should not be. Women need the ability to provide for themselves and their families. Instead of restricting women based on what we think they should do, why not empower them with the same opportunities so they can learn and work according to their own needs, talents, and desires?

I remember in my early 20's telling a man from church that I had just gotten a new job. He asked if I was a secretary. It was more of an assumption than a question. I was actually a computer programmer for a military contractor, and likely made more money per hour than he did. By choice, I have spent most of the last 30 years (with the exception of one year as a part-time teacher) as a stay-at-home mom. I don't regret that at all. I love being home, and wish I could always do that. I am planning to transition back into the paid workforce out of necessity. This should be interesting. I am a bit nervous.

The comment from the man at church over 30 years ago was actually more amusing than annoying at the time. Worse than that by far was the sexual harassment I experienced in the work place and other situations, including losing a job for refusing a boss's advances. I wrote about some of this here: #YesAllWomen: My Many Stories of Sexual Harassment.  Yet as distressing as those experiences were to me, they were nothing compared to what other women in this country have suffered. Listen to these quotes about domestic violence and sexual abuse in the home: Voices of Survivors. Then watch some videos from the recent Awaken:Awareness Matters conference.


And then when I think of the world beyond, I am absolutely appalled at what women and girls have to endure. There is no way I can be silent about trafficking, child marriage, FMG (female genital mutililation), honor killings, rape, and lack of decent health care for women.

Two of my other Facebook posts were videos I recorded from my spot in the audience at the Synergy conference in March 2011 here in Orlando. It was organized by Carolyn Custis James and keynoted by Sheryl WuDunn. Later this morning, Carolyn Custis James asked permission to post them on her YouTube channel, which I happily granted. She too has written a post for International Women’s Day, and I think she has another one coming up that has my videos in it.

So here are the videos on her channel:

Here is another of Carolyn's YouTube videos: Patriarchy is a Fallen System

Carolyn and Sheryl are both authors. You can find their books on their web sites:


Or you can order these titles, which I have read, through ChristianBook.com (Disclosure: I am a CBD affiliate and would get a small percentage.)

There is so much more that I could write, but instead, I'll leave you with one last article link
by Sarah Bessey, author of Jesus Feminist (I've read part of this) and Out of Sorts (just bought this one and hope to read soon): A Prayer for International Women's Day

Posted by Virginia Knowles at 5:50 PM No comments: